Going down with Flair 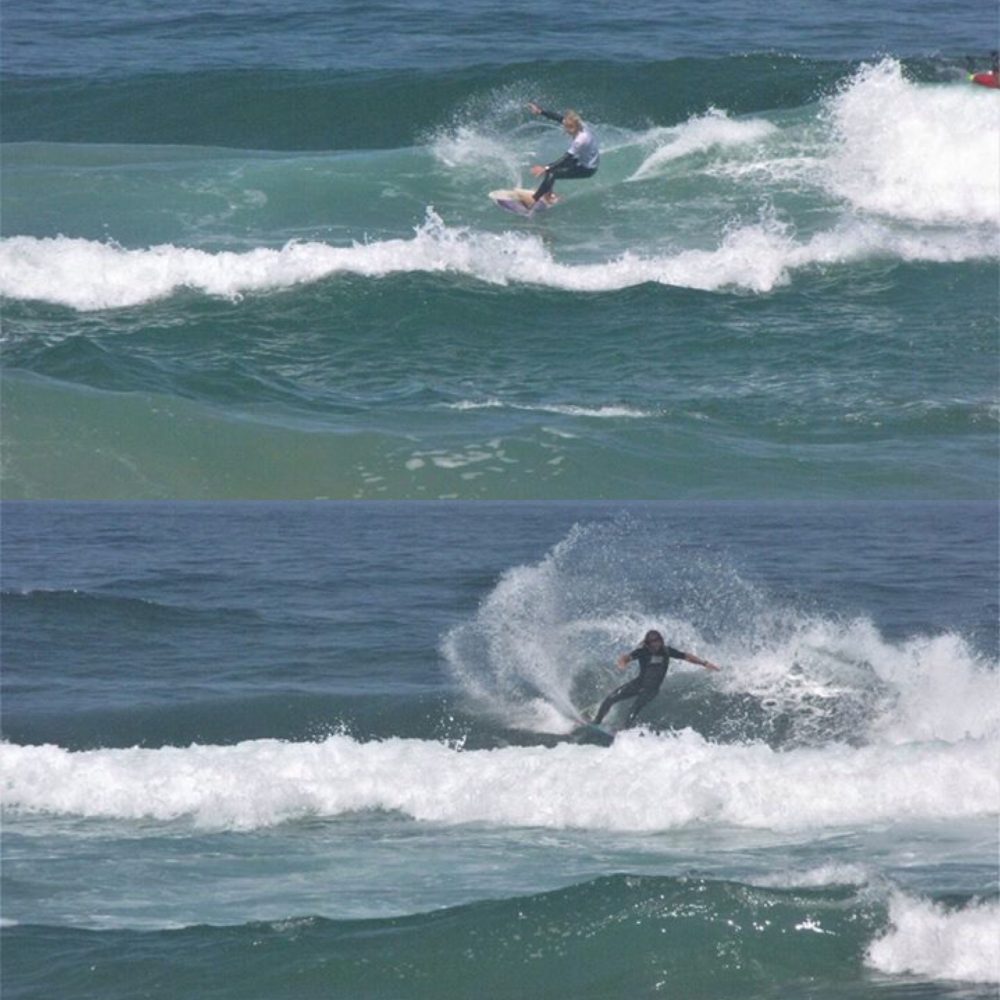 This past weekend was the Vale Figueiras Open surf competition. The beach is located just around the corner where we spend our winter 2 years ago and holds good (surf) memories. Last year I joined the competition as well and had a fantastic day, so for me there was no question I was going to try again this year.

I tried to convince all my surf buddies to sign up as well but everyone seemed to have a lot more important stuff going on or were at least manly enough to admit that “it will be full of pro-guys there, we won’t stand a chance”.
When I signed up by email I specifically asked them to put me in a heat with not just pro’s. So they did; they put me in the same heat as the only one pretty-good-but-definitely-not-pro-friend I did manage to convince to join. Just me and him. And two semi-pro’s. Bang.

Upon arrival at the beach that morning, my buddy started to regret his decision to join and I had to be honest,
we wouldn’t stand a chance against these guys. We needed a small, or why not make that a big, miracle.
Meanwhile the surf was pumping so we went in for a quick warm up to clear our heads, followed by an unexpected ‘expression session’ in which we got shown what we were up against. In that 30 minute session I caught maybe 3 waves, the rest being taken already by either supergromms who seemed to have wings on any wave they took, or the (semi-)pro’s who got more spray from their turns then the Lagos boat roundabout with a strong Nortada. Or what about that dude that had the time to think about ‘shaka-ing’ the judges while doing his straight air with board grab. But it was a spectacle just to be there and be part of it.

We returned to the beach thinking we’d have some time to rest while they started with the gromm-comp only to find out that unlike last year, they would actually start with the man’s open (aka our) division right after the expression session which meant that I had about 30 seconds to eat a banana, get my rash-vest and paddle out again.
In good news though, they kept calling out for one of the semi-pro’s to come and check-in or not be able to join, which means me and my buddy would still have a chance to make it to the next round. And indeed, there was no one at the stand where we picked up our rashies, and no one behind us in the 10 minutes we received to paddle out and find position. So we started our 15 minute heat knowing that it was actually only my buddy and me! The big miracle had happened – it was between me and him, at least one of us would make the next round.

My best wave (a backside gem) I unfortunately caught before the official time started and I only found out later, but if that was the worst of it, it would still be okay because we both had some waves we could be proud off.
It felt special to have all eyes on us, surfing under pressure. And we did well.

Can you feel the ‘but’ coming? Because peaking to early turned out to be not the worst of it, and maybe all eyes weren’t on us either.

As the heat was over and we came in, Annemarie stood on the beach. She had that smirky smile on her face I don’t like. The one that spells trouble for me. In this case, trouble meant that one of those semi-pro’s did actually turn up but paddled out more to the left from where we were. And as the other spot was left empty he was joined there by a last-minute participant… Alex Botelho. That was it, we didn’t even have to check the scores anymore. Anyway we went down against the best of the country, and one of the best big-wave surfers in the world so actually we can say it’s an honor, I guess.

The rest of the day we spend surfing and chilling on the beach. Joined and entertained by the best surfers of the region and country. The waves really were super-good. The guys doing crazy airs, strong turns, some barrels, it was like watching a surf movie in real-life. I had my best surf actually after my heat when the pressure was off and I was just inspired by all the good I had seen. To sum up the day; it was epic, and I went down with flair.