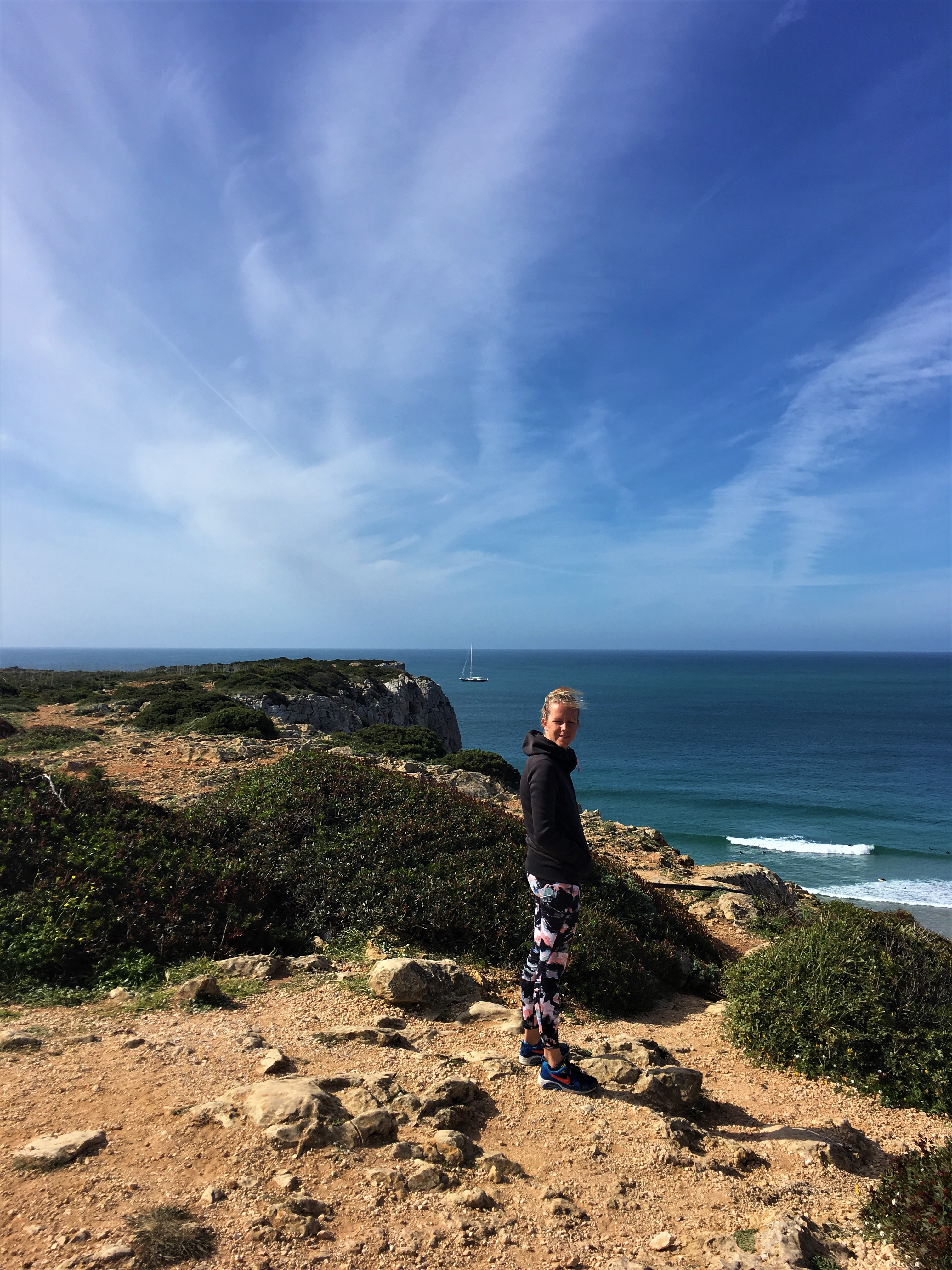 You can eat the ‘Last Brathwurst of Europe’ next to the lighthouse if you need to fuel up for another session. (ánd you’ll get a certificate you had one.) 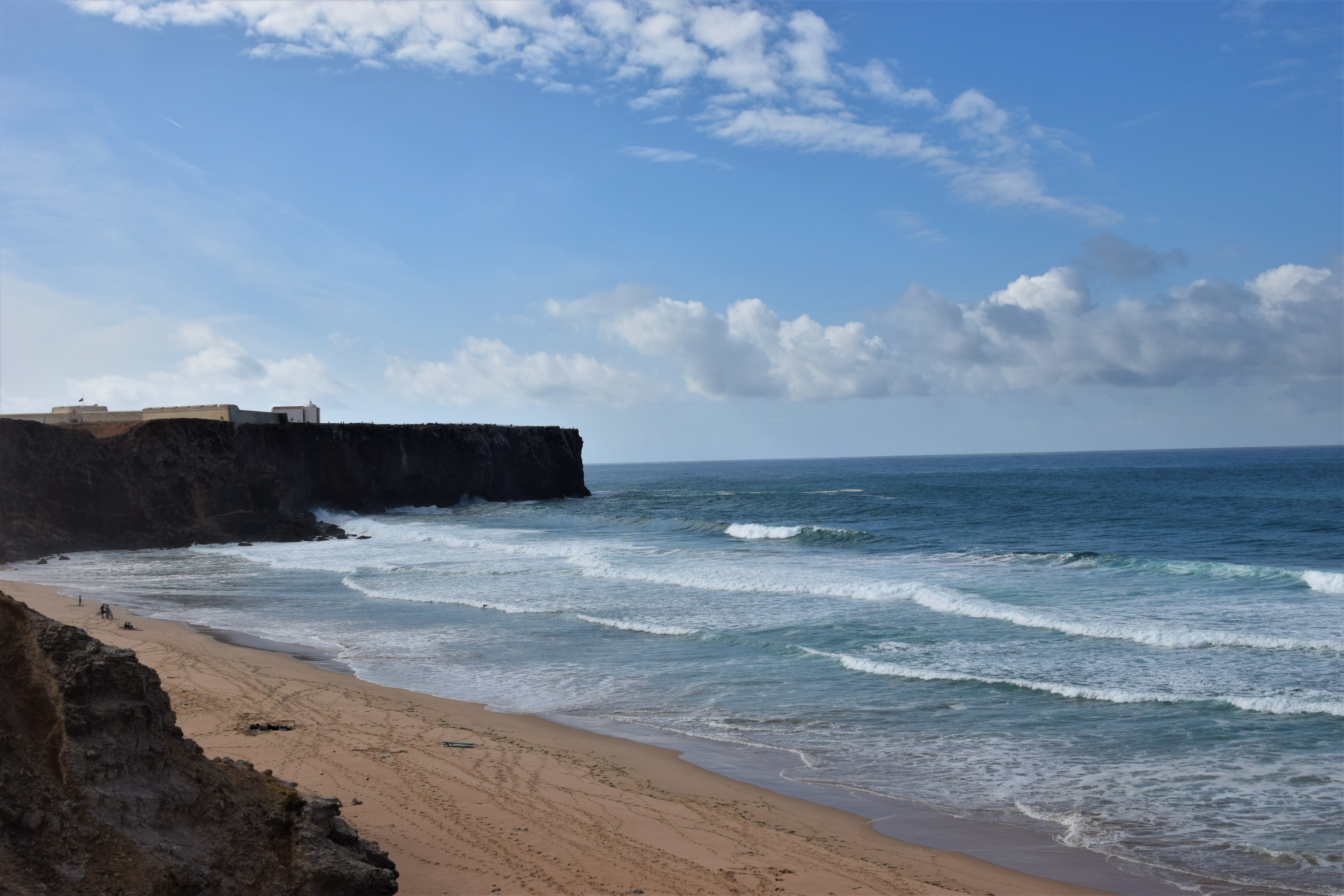 ”Sagres, the end of the world”. In our opinion every beach in the world is the end, but who are we to judge. Fact is that the geografic position of Sagres is very unique and at times can provide world class surf.

Other than surf Sagres is very famous for her spectacular cliffs and nature. There are many birdspotters and hikers to be found all year around. Especially in (summer)season there are literally bus loads of tourists flogging the region to shoot selfies with the famous lighthouse and Forteleza de Sagres, (which we both have a spectacular view of from the water.)

When to surf Sagres

Sagres is the place to be in the minds of many who have seen pictures of its waves. On the right tide, with the right swell (and the right wind) the surf can be absolutely epic. Stand up barrels, big open ocean lines, blue water, the whole deal. That is, if everything lines up perfectly… Sagres is also known as being wind capital. With the dominant North wind blowing strong already from the mornings in summer the waves are often blown out or at least very much affected by the wind.
Sagres does have the luxery of having a couple of different beaches who all face different directions so when the winds are low its almost guaranteed you’ll have something of a wave breaking somewhere in this region. Tonel is probably the most famous beach in Sagres. It doesn’t catch as much swell as the west coast but still It breaks pretty consistant. In season there’s a very nice beach bar and lifeguard assist. A little down the road of Sagres hidden between the cliffs but easy to spot by the enormous amound of campervans parked on top lays Beliche. Even when it is small this is a very powerfull wedge. One of the best places to get barreled or break your board. The locals will make sure they have priority on their waves and take extra care for the bodyboarders. All of them stoked, but play by the rules, let them go first, there will be another one coming… Beliche is facing SW and needs a quite a big N(W) swell to light up. (or the occational South swell with a lot less punch.)
Right in front of town is a sandy beach called Mareta. This faces the same direction as Meia Praia but has a lot less space (and a lot more hungry people from Sagres, locals and tourists.) So when Mareta has waves we usually stay close to Lagos.

What should I pay attention to when surfing in Sagres.

If in doubt, don’t paddle out. The waves from the cliffs always look much smaller than they are. If there is no one out, this will be for a reason. There can be heavy rips, strong currents and a lot of rocks. Please book a surfguide or inform yourself well before entering the line up. During summer it can be packed with beach goers, swimmers and surf schools alike. Always be careful with swimmers in the front and keep an eye out for those who are not so experienced with their surfboards too. And as usual, give enough space to the locals who want to enjoy it as well when the surf finally hits their homespot.

Want to hit Sagres at the right time for good surf?